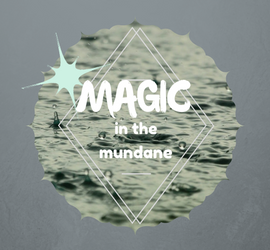 As I sit here on my couch, on this cold rainy ordinary January day, balcony door open as I completely ignore the day’s To-Do list & instead sit completely still for a good hour now, listening to the soul-soothing symphony of rain falling, leaves rustling, & scattered thunder, & welcoming the chilly air into my little apartment, I stare out the window, transfixed by the glow of my white porch lights against the gray rain-filled sky, & I’m reminded of the magic in the mundane.

I’m also reminded of another typical winter day just 11 months ago, sitting in this same room, quiet & still, just me & my thoughts. For the first time in years, I’d finally slowed down enough to fully take in & reflect on what was going on in my life. And in that time of still, thoughtful awareness on that mundane morning I experienced the kind of magic that would change evvvvverything from that point forward.

As I reflected on where I was, I came to the critical conclusion that the life I’d been living for years didn’t even remotely involve what I was put on this Earth to do. It was almost unnatural to my true self, my true calling, but it had come to feel normal to me because of its familiarity & habitualness.

I was a well-oiled bad habit with a well-buried dream. I had the spin-my-wheels routine down to an art— always in motion & never getting anywhere at all, if not behind. I’d gotten so used to it that I hadn’t realized how far off-course I’d drifted over the years. And the further I drifted from my dream, the more directionless & lost I felt, although I didn’t ever give myself much of a chance to come to that realization, as “busy” as I stayed. My dream, my calling, had been neglected for so long that it no longer steered my life’s course, like it always should’ve. That explained the directionlessness & also revealed the missing link that would get me back on track.

The magic that existed in the still silence of that mundane February morning was a tearful & life-altering realization: it was time for things to change & it was up to me to change them. Time to revive my dream, whatever it took. That was the only way forward, the only way to “find” my way again. That was the day that everything changed. The magic that I got out of that time of quiet stillness on that ordinary winter morning was what started the journey. It was the turning point, Day 1 of Dream Revival. It was the 1st day of the rest of my life, really. Nothing's been the same since.

I wonder, looking back now, where I would be today if I had bypassed being still & thoughtfully present in that moment on that ordinary February day of 2016. I wonder what would’ve happened if I had instead rushed into the day’s activities as usual & forfeited the life-altering opportunity that awaited me in the stillness of that morning. If I hadn't slowed down then, no doubt I would've missed out on the magic that the mundane stillness of that morning held for me.

I also wonder how much sooner my life would’ve turned around if I’d chosen to be still & fully aware of the current state of my life before then, instead of staying too busy to benefit from the magic of a life-changing realization. It was an opportunity I missed out on for 7 years, because I never really slowed down enough to allow it to present itself, unfortunately.

We often overlook the mundane wonders that are all around us, like being able to sit on your cozy couch & watch rain falling from the sky on your day off. And we often miss out on the magic that exists in stillness, because we don’t slow down enough to experience it. On the way to getting everything done, we hurry past so many opportunities for life-altering realizations. When we fail to slow down, we forfeit the benefits that come from being still. As long as we rush along, unaware, spinning our wheels in the relentless rat race, the magic that awaits only in the mundaneness of quiet, still moments goes unexperienced. It's our loss. And so often we're unaware of the profound magic we miss out on.

When was the last time you really shut out all distractions, sat still, & fully took in what was going on around you or within your life? When was the last time you found magic in the mundane? Or had a life-changing realization in the stillness of an otherwise ordinary day? If it’s been awhile, then maybe you’re past due. You wouldn't be reading these words now if I hadn’t slowed down enough to have the breakthrough I did just 11 months ago.

Maybe what you’re missing right now is the kind of magic that exists only when you slow down enough to really fully take it in. It could be right under your nose (& it probably is). You can find it almost anywhere, but only if you choose to...

It could be in a half hour of quiet, still thought about whether your life is in alignment with what you feel you're on this Earth to do.

You could try taking a few minutes right now to stop & relish every single little thing in your immediate environment that has a magical way of making you happy for whatever reason.

You could find it by taking a walk outside to fully take in some of the natural wonders of this amazing world that you haven't stopped to notice much lately.

Maybe what you need to turn things around is something that can only be found in a still, quiet, thoughtfully aware moment in an otherwise ordinary day. Maybe that’s where you’ll find what you’ve been missing.

Whatever you do though, don’t miss out on the magic. It’s hidden in the ordinary & exists in the stillness of every day. It's available to anyone at anytime. So, make time for it. You never know, it may just change your life… (It did mine.)

In January 2016, I was hanging on by one thin, very rapidly unraveling thread. I was past burnt-out & rapidly reaching the point of misery. The emotions were negative & they were intense. Generalized frustration with life was hitting a peak. It was not a good time. Not at all. It felt like all of the sudden, all this inner turbulence was coming to a head, but I didn't know where it all came from or why. So after working for several years with no vacation & no real time off, I took off work for 10 days to try to straighten things out. And that's the best thing I ever could've done. I didn’t understand what was really going on at the time, but I clearly understand it now.

It was in January 2016 that everything I’d ignored, buried, & distracted myself from for years finally started to emerge & come to a head. I’d just made some small positive changes in my life in the month or two prior, kind of cleared my head & rearranged my schedule a little. And those small shifts, in turn, had started to give way to sort of a mental avalanche that would take me by storm in January.

With a clearer head & more free time than I’d had in years, light was finally being shed on what had been long buried: my dreams, my calling in life, what was really important to me. That made for some unpleasant realizations I’d soon reckon with. And the negative emotions I was experiencing at the time were symptoms of those realizations beginning to surface, but I hadn’t quite processed all that yet, because I hadn't ever given myself a chance or time to, of course.

At first, I began to think about my own mortality. If I died younger than expected, as someone very close to me did, then how much time did I have left to do what I was “born to do” (cuz I definitely hadn’t done it yet)?  And how much time had I wasted?

I thought about how I was using my time. Why I was investing full-time in my own misery by working in a restaurant during off-season? It’s practically pointless, money-wise, but it’s what I’d always done. Why?

I forced me to question myself. And they were tough questions, with unforgiving answers. The truth is ugly. And so were my emotions…

Truth be told, although it was an awful time, that miserable month had to happen in order for me to have the breakthrough I did the following month. Sometimes misery & pain play an important role in paving the way for what’s just ahead. Like they say, “It’s gonna get worse before it gets better”— well, January 2016 definitely represented the worse part. But, if it hadn’t gotten as bad as it did, my life never would’ve gotten better, either.

Looking back now, I think all the overwhelming emotion was some inner part of myself screaming for help, maybe it was my gut, maybe my buried dream. Whatever it was, it’s like some internal force trying to help me knew that an all-out emotional overthrow was the only way to get through to me. I was too logic-oriented & averse to discomfort back then to purposefully decide that it was a good time for me to do something completely out of my nature & make some big changes. Only my own emotions could’ve pushed me to the point, & thankfully they did.

January 2016 was the emotional overthrow I couldn’t contain, that made way for the wake-up call I couldn’t ignore. Misery can sometimes contain a key directional message... If you hit that point, slow down enough to sort it out, get to the true source of it, & let it point you in a better direction. It may be there for a way more beneficial & potentially life-changing reason that you may realize.

Need Some Inspiration For Your Own Turnaround?