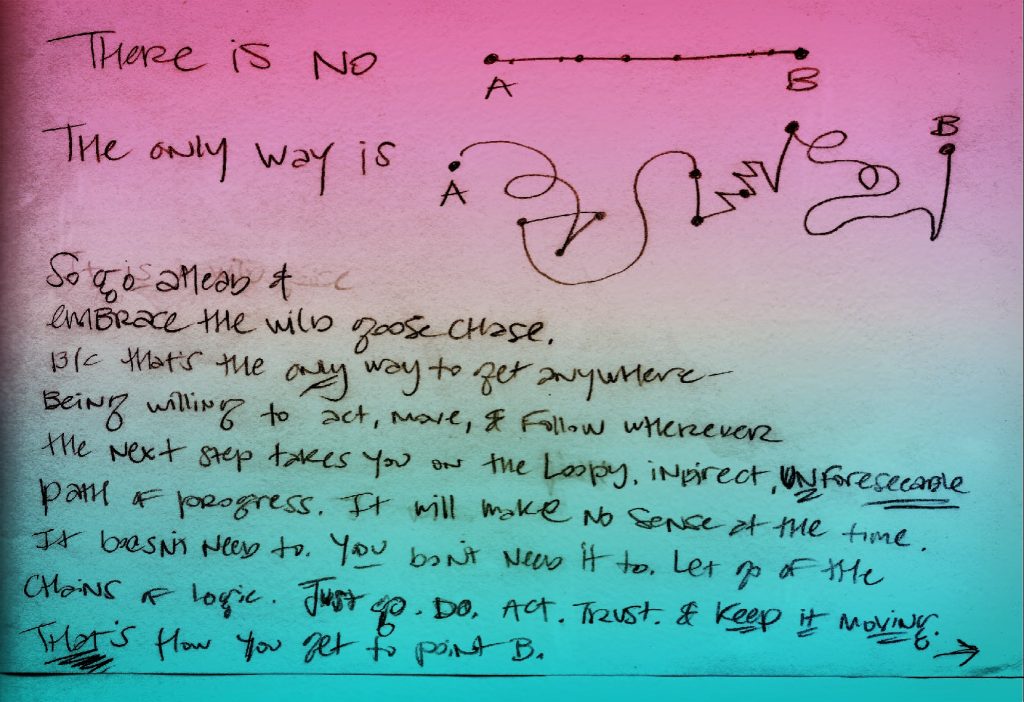 That question bounced around my mind for a looooong time before I got my answer...

For so many years (7 to be exact), I struggled to find my way within the “old model”, hoping to stumble upon the How-To guide that worked for me, to discover the book that outlined the way to my dreams. I know now that I was looking, waiting, & hoping in vain. Because I finally realized that I would never “find it” & it would never “come to me”, because it didn't already exist.  I would have to build it.

I would have to totally abandon the standardized scaffolding of success, the “status quo model”, the straight line with all the neat little orderly dots & the easy-to-follow trajectory. The one where you can see all the steps required to reach a certain goal, where everything is laid out, where it’s all very clear, & you know exactly what you’re getting yourself into when you set out to reach a goal. The one where you never have to wonder what to do next.

Progress was finally made when I realized that the only way forward was to abandon any hope in a map & cut my own path. But therein lay a brand new problem—I had NO IDEA HOW.

What I soon found out was— even that  was a place to start. That is  Point A. A confused, map-less state, with nothing but a very vague general direction in mind to direct you. An overwhelming sense of “I have no idea what I’m doing here”. An uncomfortable condition of taking one very shaky step into the territory of the unknown & daring to defy the security you've always known for the chance that it might actually be holding you back. Those are the indicators that you’re headed in the right direction. (They never taught you that in school, did they?)

So, then, what exactly does Point B look like?

Well, there’s no way to know until you’re already past Point A & on the way to it. It goes kind of like this. First, you start blindly. Blind & scared & completely unsure. But you start, you take action, you make the first move, you actually DO something. And then, once you’ve gone through with that, another step will appear in some way. For me, it happened like this— I was presented with a choice, an action or opportunity I could choose to take or not take, & when taken, that action ultimately led to the next step.

For example, maybe it’s an inkling to email an old teacher that could light the way for you, or maybe it's reading a recommended book that will build the guts in you that you’ll need to take the next step. Maybe it's a gut feeling to contact someone who ends up warning you of a pitfall that would’ve derailed you, or maybe it's an itch to apply for an upcoming art show that could be the start of it all. The first step could be anything. But, the point is, "the beginning of the path" will never materialize until you take some notion that's in line with your dream & choose to actually GO for it, to take real action towards it, & see where it might lead. (You might just be wildly surprised, you truly never know until you try, life is full of surprises, after all.)

Bottom line is, it’s a wild goose chase. What you gotta understand is— this non-status-quo-compliant kind of path is not in the business of predictability, guarantees, or foreseeability, at all. It’s a very strange, mysterious trajectory. It puzzles, but it also surprises. That’s part of the beauty of it. It’s a complete adventure, if you’re willing to take it.

That’s how it worked for me. That’s how I found created  Point B, and all the points after it. Not with a solid logical plan that outlined all the steps beforehand, but with one shaky, scary, unsure, unforeseeable step at a time, with nothing but blind faith in a seedling dream to light the way. I cut the path as I went along. And the way was lit little by little. Never could see too far ahead, & I still cant. But I’ve learned that that’s part of the magic of it. That’s just how it works. I see as far ahead as I need to for now, & the rest will unfold when I need it to, as long as I keep taking action in line with my dream.

What about you? Are you stuck without any idea what of step you should take?

Forget the “should”. Don’t worry about the “how”. Don’t waste time trying to “figure it out” before you take action. Go out & do something. Follow your gut, that quiet calling that’s been pulling at you. Don’t let fear or being unsure stall you out any longer. Those things will stall you indefinitely if you let them. In the meantime, your path is waiting for YOU to unfold IT, & the steps that pave the way are waiting for you to put them in place, one at a time. So create the first one & let’s get this thing going already! Now’s the time. It’s your turn. Your first step to put in place. Your shot to build your dream your way. Take it. Make it. Build it. Don’t wait. GO ROGUE.

♦  Need a little more inspiration on getting from stuck to started? Check out this mini-post, from the blog of the epic inspirer, Seth Godin: The Best Way To Get Unstuck.

♦  Or, for a faith-based inspirational message, check out this video by Joel Osteen. It's all about the dream-delivering journey of blind faith. He'll tell you about how stepping boldly into the unknown is the way to your dreams. 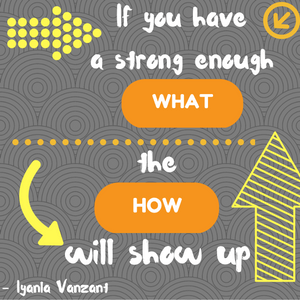